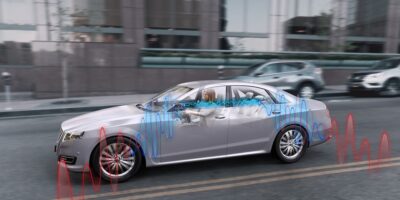 Introducing the first road noise cancelling (RNC) sensor in a family developed as a result of a partnership with Analog Devices and Silentium, Molex has unveiled the accelerometer-based sensor, the first in its automotive active noise cancellation (ANC) sensors.

ANC technology is typically associated with high-end headphones, but these ANC sensors are designed to be installed on a vehicle’s chassis for effective noise cancellation in place of expensive and heavy sound-absorbing materials being used to insulate car interiors. Part of the design criteria for devices mounted to wheel wells and car frames, is that they are built to withstand the harshest conditions.

Molex’s family of ANC accelerometer and microphone sensors use Analog Devices’ Automotive Audio Bus (A2B) technology to deliver high-fidelity audio, reduce cabling complexity, costs and weight. By pairing its sensors with the A2B network, Molex transmits noise signals to the processing unit in less than two milliseconds. The sensors include integral connectors and are daisy-chained to simplify integration while providing up to a 30 per cent reduction in cable weight. Derived from Molex’s Mini50 Connector family, the connectors offer up to 50 per cent space savings over traditional USCAR 0.64 connectors, reports the company.

The sensors are available in different housings, including an IP6K9K enclosure, to ensure greater protection from harsh conditions despite being close to the noise. Detecting the sound at its source speeds processing of the noise-cancelling signal. A2B technology also allows a higher number of signals per chain to be processed, says Molex. The sensors are sensitive enough to measure and cancel road noise at slower vehicle speeds, for flexibility in placement while simplifying engineering.

Molex has tested and validated the use of its RNC sensor with Silentium’s Active Acoustics software, which removes up to 90 per cent of unwanted noises across a broad band of frequencies (from 20Hz to 1kHz) to improve driver and occupant comfort, safety and wellbeing. Research has shown that the elimination of frequent humming or droning noises from roads and tyres is critical to decreasing so-called highway hypnosis and driver fatigue.