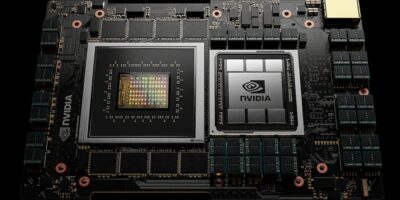 Entering the data centre CPU arena, Nvidia has unveiled Grace, a server class processor for AI and high performance computing workloads. A system using the Arm-based processor, coupled with the company’s GPUs can deliver 10x faster than systems based on Nvidia’s DGX, which run on x86 CPUs.

The LPDDR5x memory subsystem is claimed to deliver twice the bandwidth and x10 better energy efficiency compared with DDR4 memory.

“Coupled with the GPU and DPU, Grace gives us the third foundational technology for computing, and the ability to re-architect the data centre to advance AI,” said founder and CEO, Jensen Huang at the launch during the company’s virtual GTC2021.

The processor combines energy-efficient Arm CPU cores with a low power memory subsystem to target workloads which can have over one trillion parameters – or “unthinkable amounts of data” said Huang, for niche computing in AI and data science.

Today’s largest AI models include billions of parameters, a number which is doubling every two and a half months, says Nvidia. Training them requires a new CPU that can be tightly coupled with a GPU to eliminate system bottlenecks. Grace uses Arm’s data centre architecture with its IP and licensing model.

The architecture provides unified cache coherence with a single memory address space, combining system and HBM GPU memory which is claimed to simplify programmability. Grace will be supported by the company’s HPC software development kit and the full suite of Cuda and Cuda-X libraries to accelerate more than 2,000 GPU applications.

Grace is expected to be available at the beginning of 2023.

The Swiss National Supercomputing Centre (CSCS) and the US Department of Energy’s Los Alamos National Laboratory have already announced plans to use Grace-powered supercomputers built by Hewlett Packard Enterprise. They are expected to be online in 2023. Los Alamos’director, Thom Mason, said the Grace CPU will be used to “deliver advanced scientific research using high-fidelity 3D simulations and analytics with datasets that are larger than previously possible”.

Appropriately, the CPU is named after Grace Hopper, the US Navy rear admiral and computer programmer scientist who developed the first computer language compiler.