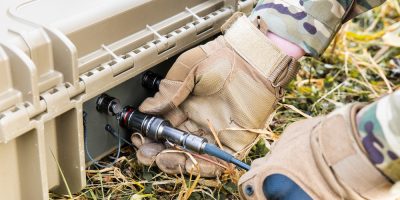 The connector design combines the advantages of a conventional expanded beam model, such as insensitivity to dirt, scratching and vibration, with the high performance attenuation values of a physical contact (less than 0.3dB). Compared to conventional expanded beam technologies, the AMC series T allows three to four times the number of glass fibres to be integrated in the same space. Accordingly, the number of interfaces and overall footprint are reduced, while the transmission capacity is increased by a factor of four, said ODU.

The AMC series T has a three-in-one locking mechanism (break-away, push-pull or thread-lock) with separately sealed electrical and mechanical components. Depending on the connected subsystem, the user can select the appropriate locking variant.

The connector is designed to meet security challenges in military systems which must be adaptable in land, sea, air, and multi-domain operations, also known as cyberspace. Applications with integrated C4ISTAR systems, such as the aircraft, satellites, ships, and ground vehicles used by international forces, gather large quantities of information and processing, analysing and transferring this data represents a growing challenge.

The synchronisation, consolidation, and distribution of the collected data often takes place in specially equipped vehicles as well as container systems that can be quickly relocated. These systems allow infrastructure for emergency services to be constructed quickly, even in the most remote regions. Mobile command posts or forward operating bases (FOBs) require scalable designs with reliable data, signal, and power connections. The AMC Series T is an easy to use, robust and scalable interface, specifically designed for users and manufacturers of military vehicles and their subsystems.