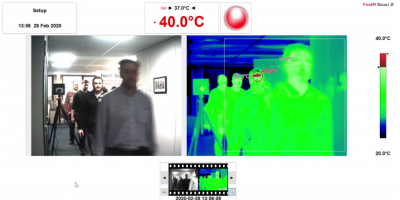 A skin temperature measurement system has been developed for mass screening of high pedestrian areas such as airports, train stations, factories and other public places.

A British company, Thermoteknix Systems, is currently using cameras from Imaging Development Systems (IDS) with thermal imaging cameras to detect people with elevated temperatures and so who may potentially have the coronavirus. The non-contact thermal imaging and measurement system designed for mass screening, detects temperature differences of less than 0.6 degrees C and with an accuracy of fewer than 0.3 degrees C. “The Thermoteknix FevIR Scan software tracks people in real-time as they walk in front of the camera and shows their maximum face temperature on screen,” explained Richard Hames, sales director at Thermoteknix Systems.

The UI-1642LE-C model detects people passing through the system. It is equipped with a 1.3 megapixel CMOS sensor from ON Semiconductor, which has a resolution of 1280 x 1024 pixels and a frame rate of 25 frames per second. This frame rate enables screening in places with a high volume of people, such as airports or entrance halls, said Thermoteknix.

The FevIR Scan thermal imaging and temperature measurement system from Thermoteknix is easily installed, operated and relocated with minimum set-up time and operator training says the company. On-screen and audible alerts identify one or more individuals in a large crowd with visible temperature tracking, aiding rapid detection and maintaining pedestrian flow. The system is password-protected to prevent unauthorised changes and the flexible configuration software allows the user to select ‘thermal’ and ‘visible picture side by side’, or ‘picture in picture’ views, together with recalled images for fever alerts and second level fever screening.