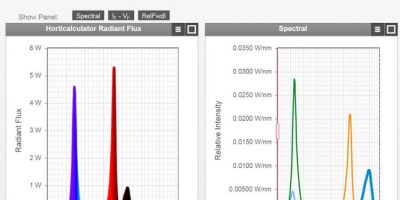 Online design platform, Redexpert, by Würth Elektronik eiSos, has been extended to include a component selection based on measured data.

The simulation software is claimed to be the world’s most precise option for AC loss calculation in switch mode power supplies. It now supports calculations for a range of other components, with product groups added that include LEDs for horticultural applications, wireless modules, photodiodes and foil capacitors.

The properties of the components can be predicted under different operating conditions using stored data. Redexpert’s special feature, says Würth, is that calculations are made on the basis of real measured laboratory data. Developers no longer need to do much of the mathematical calculating and simulating work involved with qualifying components. Using DC foil capacitors as an example, all the graphs required for a powerful design analysis are available – based on the measurement data delta CvsF, ZvsF, ESRvsF. The addition of the Horticulator function enables the design of individual lighting recipes for the use of horticulture LEDs. Starting with information on the number of LEDs used, the input current and the input connection temperature, the full spectra, photosynthetic photon flux (PPF) and wavelength colour ratios can be calculated.

Using the online tool, developers can base the selection of components on characteristics acquired by experimentation rather than calculations based simply on the specifications in the datasheet. For instance, the photodiodes and phototransistors from Würth Elektronik eiSos are now covered in Redexpert and are represented by curves of the viewing angle, spectral sensitivity, irradiance and emitter-collector.

Another tool for the development of wireless solutions is the Range Estimator. This allows distance ranges to be calculated as a function of a given data rate and link budget.