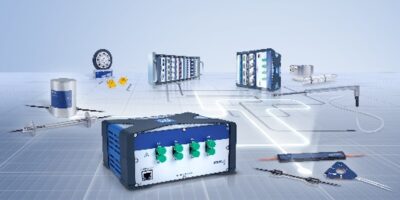 Claimed to provide “incredible stability” against external influences, the MXFS also has a high sensor capacity of 128 channels per device. HBK has developed the optical interrogator for engineers carrying out measurements within unpredictable environments, such as construction sites or laboratories.

MXFS is a fibre Bragg grating measurement device, based on the BraggMeter technology, that is integrated with HBK’s QuantumX platform. Fibre Bragg grating sensors are easy to install, says HBK, electromagnetically safe and suitable for use on long structures or remote locations, for example pipelines or bridges.

The flexible device can be used as a single module for tasks including pantograph monitoring of trains. It can also be combined with other data QuantumX devices, to form a larger system, for complex projects requiring synchronised measurements from different sensor technology and integrated into systems with the most common communication protocols for long term monitoring projects, such as wind turbines. They can also be used for battery testing and validation.

MXFS is compatible with all modules from the QuantumX series, sharing a common application programming interface (API), LabView drivers and catman software.