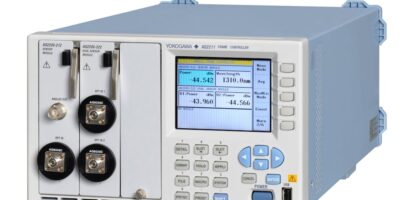 They are both designed to work with the AQ2200 series frame controllers, and offer improved performance over the existing AQ2200-221.

The modules have an improved uncertainty of ±2.5 per cent (compared to three per cent for the predecessor). Minimum averaging time has been halved to 100 microseconds, compared to the AQ2200-221.

Other performance figures include a wavelength range of 800 to 1700nm and a polarisation dependence of 0.02dB.

One of the main applications of the new products is I/L curve (drive current/optical power) measurement of laser diode modules. The single-range power range of the new sensor module is up to 30dB, meaning the I/L curve characteristics can be measured accurately, quickly and seamlessly, Yokogawa says.

Another is stress testing of an optical fibre cable. The ability of an optical fibre cable to resist impact is evaluated by measuring the momentary optical interruption and optical attenuation, as well as the degree of impact. Multiple AQ2200-212s allow optical inputs from the fibres to be measured following the application of a shock load, with the corresponding data sent to a data recorder via the analogue outputs.