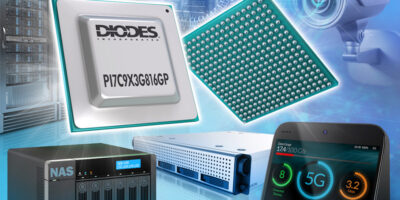 Offering design flexibility with 16-lane operation which can be two-, three-, four-, five- and eight-port configurations, the PI7C9X3G816GP PCIe 3.0 packet switch has been released by Diodes.

It has been designed to meet advanced performance needs in the networking and telecommunications infrastructure, security systems, fail-over systems, artificial intelligence (AI) and deep learning, network attached storage (NAS), host bus adapter (HBA) cards and data centre applications. It has a wide operating temperature range of -40 to +85 degrees C, making it suitable for a growing number of industrial applications, such as embedded, industrial PC (IPC) and industrial control.

Proprietary architecture in the PI7C9X3G816GP packet switch allows it to be configured to have multiple port / lane width combinations, such as upstream, downstream, and cross domain end point (CDEP), to support fan out and dual host connectivity.

There is also a built-in thermal sensor which reports operational temperature instantly. Advanced power management means that the PI7C9X3G816GP aligns with the most stringent energy-saving requirements for data centres. For example,  the packet switch supports seven power states to efficiently align with the power requirements and any inactive hot-pluggable ports are kept in a low-power state, explains Diodes. Advanced diagnostic software tools, including PHY Eye, MAC Viewer (embedded LA), and PCIBuddy, assist designers throughout system development.