PCIe board based on RFSoC targets wireless applications 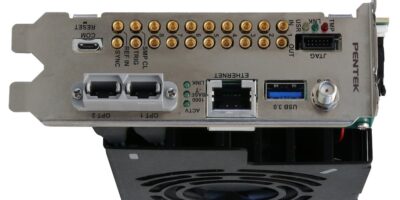 Expanding the Quartz RFSoC architecture family, Pentek announces the Model 7050. This eight-channel A/D and D/A converter, PCIe double-wide board is based on the Xilinx Zynq UltraScale+ RFSoC.

According to Pentek, the Model 7050 brings RFSoC performance to PC platforms with a complete system on a board. The Zynq UltraScale+ RFSoC FPGA is the industry’s only single-chip, adaptable radio platform and is popular for 5G and LTE wireless, SIGINT and COMINT, EW countermeasures, radar on a chip, test and measurement, satellite communications and lidar applications.

The PCIe form factor makes it easy to develop or deploy on a standard desktop PC and the Pentek software, developed on the PCIe board, can be moved seamlessly to other form factor platforms, including VPX and custom small form factor (SFF), explains Pentek.

All control and data paths on the Model 7050 are accessible by the RFSoC’s programmable logic and processing system. A full suite of Pentek-developed IP and software functions use this architecture to provide data capture, timing and interface solutions for many of the most common application requirements.

The Pentek Quartz architecture simplifies the design to reduce power and cost, while still providing some of the highest performance FPGA resources available today, claims the company. It is designed to work with Pentek’s Navigator design suite tools to develop and deploy software and FPGA IP for data and signal processing.

The front end accepts analogue IF or RF inputs on eight panel mounted MMCX connectors with transformer-coupling to eight four Gsamples per second 12-bit A/D converters delivering either real or complex DDC samples. With additional IP-based decimation filters, the overall DDC decimation is programmable from two to 128. The eight DACs accept baseband real or complex data streams from the FPGA’s programmable logic. Each 6.4Gsamples per second 14-bit D/A includes a digital upconverter with independent tuning and interpolations of one, two, four and eight. Each D/A output is transformer-coupled to an MMCX connector.