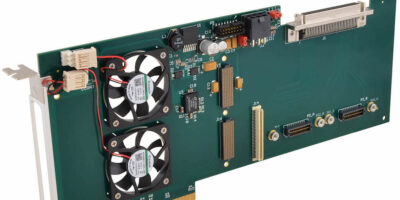 Power, PCIe bus signals and cooling air is provided to an XMC mezzanine module for signal processing in small, embedded computer systems via the APCe8775 PCIe carrier card by Acromag.

The APCe8775 carrier card allows a PC to communicate with an XMC mezzanine module over a PCI Express bus. System developers can insert an FPGA module or other XMC module on the carrier card for signal processing. The 3/4-length PCIe card is intended for use in smaller embedded computers and servers with reduced-depth expansion slots. Low profile fans provide XMC cooling from within a single expansion slot. The carrier’s PCIe x8 interface supports up to eight serial lanes for rapid data transfer between the plug-in XMC module and the host computer.

The carrier cards are suitable for use in military and scientific research computing systems, where they can also help test advanced defence and aerospace systems for later deployment on rugged computing platforms such as VME, VPX, or CompactPCI.

One XMC socket interfaces up to eight serial I/O lanes to the carrier’s PCIe x8 edge connector. The other XMC socket routes to a pair of four-lane serial ports for board-to-board connections that support up to five high-speed (5Gbits per second) transmit/receive differential or LVDS pairs. A 64-pin XMC P4 rear I/O socket routes 32 LVDS I/O to a SCSI port for additional board-to-board communication.