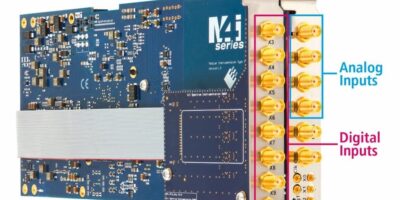 Spectrum Instrumentation has added a digital input option (M4i.44xx-DigSMA) for its high resolution series of PCIe digitisers. The module sits beside the existing digitiser card to provide eight additional digital input lines. The digital input module shares a common clock and trigger with the base card so that both the digital and analogue inputs are synchronous. The digitiser and module can be used for a variety of mixed signal testing applications. The option is available for all digitiser models of the 44-series with up to 500Msamples per second and two or four analogue inputs. More analogue channels can also be acquired by linking up to eight digitisers with Spectrum’s Star-Hub clock and trigger distribution system.

There are eight models in the Spectrum M4i.44xx series. Options are PCIe digitiser cards with two or four analogue channels and sampling rates of 180 or 250 Msamples per second, with 16-bit resolution, or higher speeds of 400 or 500 Msamples per second, with 14-bit resolution. The digitiser cards have analogue signal conditioning (six input ranges, selectable input impedance, offset), Acquired data can be stored in an on-board memory (2 Gsamples) or transferred to a PC in a variety of memory-efficient read-out modes, including FIFO streaming, at rates up to 3.4 Gbytes per second.

To ease integration into any test setup, the cards have additional front panel connections that include two external trigger inputs, an external clock reference input, clock output and three general purpose I/O lines that are available for asynchronous I/O operations. Software and tools are provided for operation in virtually any system, says Spectrum, for example embedded in an automated testing rig for electronic components or used as the key data acquisition device in science, communications, power, aerospace or medical applications.

A separate PCIe faceplate occupies an additional PCIe slot. Each input has an impedance of 10 kOhms (to 3.3V), allowing the inputs to handle 3.3V LVTTL signals with input voltage levels between -0.5 to +4.0V. The digital input bandwidth is 125MHz and software selection enables both synchronous and asynchronous acquisition modes.

For applications that require more channels, Spectrum enables multiple M4i.44xx series cards to be connected together with its Star-Hub system. Up to eight cards can share a common clock and trigger. For example, by simply connecting together three M4i.4451-x8 digitizers, two with the M4i.44xx-DigSMA digital option and one with the Star-Hub option, a single system can be made that has 12 analogue and 16 digital channels.

The digitisers and the digital input option are supported by the Spectrum software development kit (SDK) which includes programming using C++, C#, VB.NET, Python, JAVA, LabVIEW or MATLAB. The SDK is included as standard with every unit along with a base version of Spectrum’s own software, SBench 6. Spectrum also offers SBench 6 Professional software which extends the capabilities of the base version with additional features such as FFT analysis, analogue and digital waveform display modes, XY display, a function interpreter, additional parameter measurements, export into ASCII, Wave, MATLAB, comment functions (for annotating signals or displays) and report and printout function.