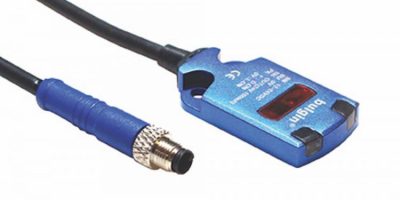 Slim photoelectric sensors have been announced, as the first part of its Bulgin’s automation sensor series. The SL series sensors are designed specifically for manufacturing automation and industrial automation proximity sensing operations. They are, says Bulgin, a cost-effective and flexible sensor the implementation of the Industrial Internet of Things (IIoT).

The sensor interface converts a photonic input to an analogue or digital output. It can be used to detect distance, presence or absence of an object using a light transmitter and a photoelectric receiver, featuring a typical light point diameter of 5.0mm at 30mm. The diffuse reflective sensor can be used to detect objects from one to 40mm away with a response time of less than 0.5 milliseconds.

The body of the sensor measures just 30 x 16 x 4.5mm, to save space on the assembly line. The SL series features a waterproof and dustproof seal to any standard M5 interface as well as a high degree of mechanical and electrical stability, says Bulgin.

The SL series is available with or without an M5 connector, and the cables are two metres in length. Both NPN and PNP output options are available.

Bulgin manufactures a range of rugged connectors, fuse holders, battery holders, switches and indicators designed for use in the most challenging of environments. Headquartered in Cambridge, UK, Bulgin also has offices in all key global regions and an extensive sales and distribution network spanning 65 countries. Its manufacturing facilities are based in the UK and Tunisia.