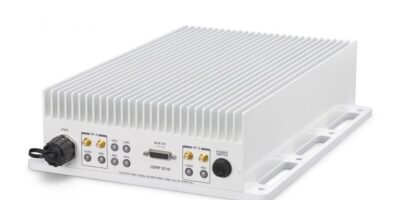 The TwinRX is a dual channel super-heterodyne receiver that offers wide dynamic range and accurate phase synchronisation with local oscillator (LO) sharing for spectrum monitoring and direction finding. There is also the option of a global positioning system (GPS) disciplined oscillator as well as versions with one UBX daughtercard and one TwinRX. The UBX is a full-duplex wideband transceiver that covers frequencies from 10MHz to 6GHz.

The RX310-2 allows one or two TwinRX daughtercards to be installed in the chassis.

Pixus installs the motherboard and daughterboard configurations into a rugged weatherproof enclosure that is sealed to IP67 for water and dust ingress.  The conduction-cooled chassis is also optionally designed for MIL-STD-810 for shock/vibration and MIL-STD-461 for EMI. Light rugged versions with fans and filtering are available upon request.

The I/O panel for the RX310 is modular, which allows for customisation, advises Pixus.

Pixus Technologies is comprised of industry experts in electronics packaging. Founded in 2009 by senior management from Kaparel, a Rittal company, Pixus Technologies produces embedded backplanes and systems which are focused primarily on ATCA, OpenVPX, MicroTCA and custom designs. Pixus also has an extensive offering of VME-based and cPCI-based products.

In May 2011, Pixus Technologies became the sole authorised North and South American supplier of the electronic packaging products previously offered by Kaparel and Rittal.