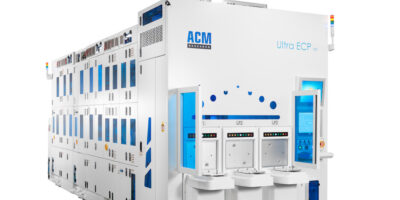 According to Mordor Intelligence, the fan-out packaging market is expected to experience 18 per cent compound annual growth rate (CAGR) during 2021 to 2026. In addition to cost advantages, they are approximately 20 per cent thinner than traditional flip-chip assembly, thus making them particularly attractive for use in smartphones which require slim profiles.

“One of the major challenges in 3D plating applications is to plate metal film in deep vias or troughs, which have a depth of more than 200 microns, at high speed and with better uniformity,” said Dr. David Wang, ACM’s chief executive officer and president. “Historically, performing copper plating for pillars at high plating rates encountered mass transport limitations that reduced the deposition rate and generated an uneven top profile of the pillar. Our new high-speed plating technology solves the mass transfer challenge while achieving a better pillar top profile and delivering improved height uniformity at a higher throughput,” he explained.

ACM’s high-speed plating technology can enhance the mass transfer of Cu ions during Cu film deposition, at the same time coating all pillars on the entire wafer at the same plating rate. This allows for better uniformity within wafer and within die during high-speed plating. Wafers processed using this technology achieve wafer-level uniformity below three per cent, an improvement over other approaches’ performance at the same plating rate. It also offers better co-planarity performance and higher throughput, says ACM.

ACM Research develops, manufactures and sells semiconductor process equipment for single-wafer or batch wet cleaning, electroplating, stress-free polishing and thermal processes that are critical to advanced semiconductor device manufacturing as well as wafer-level packaging. The company is committed to delivering customised, cost-effective process solutions that semiconductor manufacturers can use in numerous manufacturing steps to improve productivity and product yield.