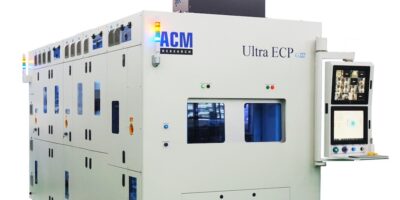 The tool is also capable of plating gold (Au) into back of board, deep hole processes with greater uniformity and better step coverage, said ACM. The fully automated Ultra ECP GII supports high volume manufacturing that accommodates both flat and notched six-inch wafers.

Compound semiconductor manufacturers can use the plating tool to support wafer level packaging with copper–nickel–tin-silver plating modules using second anode technology, integrated with a vacuum pre-wet chamber and a post-clean chamber, or for Au plating systems.