PMC module from Tews Technologies is designed for COTS and transport 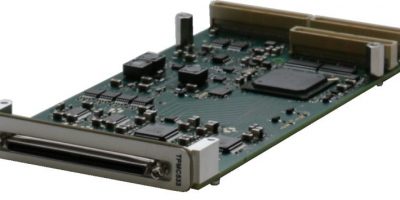 All signals are accessible through a HDRA100 type front I/O connector. The PMC-connectors P11 and P12 provide access to the control logic via a 32-bit 33MHz PCI interface.

The ADCs offer differential inputs with software selectable ±5.0 and ±10V bipolar input voltage ranges (one common setting for all eight channels of each ADC). The maximum sample rate of the ADCs is 200ksample per second. There is an oversampling capability with a digital filter.

The DACs offer software selectable 0 to 5.0V, 0 to 10V, 0 to 10.8V, ±5.0, ±10 and ±10.8V output voltage ranges. There are individual settings for each of the four channels of each DAC. The settling time is typically 10-micro seconds and the DAC channels are capable to drive a load of two kOhm, with a capacitance up to 4000pF.

The TPMC533 provides two sequencers, one for ADCs and another one for DACs. To perform periodic simultaneous conversions the conversion rates are programmable and can be output to other modules on PMC back I/O connector P14 or front I/O connector DIO pins for synchronisation. The TPMC533 can also operate as a target which means that the conversion rates can be sourced from P14 or front I/O, created by another module.

The signals on PMC back I/O connector P14 are electrostatic discharge (ESD) protected and driven or read by tri-state 5.0V-tolerant TTL buffers.

The TPMC533 provides input and output FIFOs to be able to collect ADC frames and to output DAC frames. Data transfer on the PCI bus is handled by block transfer mode DMA cycles, initiated by the TPMC533 with minimum host/CPU intervention, says Tews Technologies.

All DIOs can be programmed to have their transmitters enabled or disabled individually per I/O line. The digital I/O receivers are always enabled, so each DIO level can always be monitored and can generate an interrupt, triggered on rising edge, on falling edge or both. A debounce filter can be configured to eliminate bounce on the digital I/O lines.

Software support for major operating systems such as Windows, Linux, VxWorks, Integrity and QNX is available.