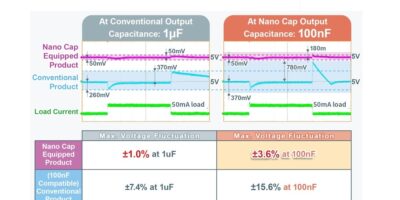 Nano Cap power supply technology has been developed by Rohm Semiconductor to ensure stable control of power supply circuits in the automotive and industrial fields, even with small capacitances in the magnitude of nF, says the company.

The number of electrical components increases, especially in the automotive market and each electrical application requires a variety of voltage sources, all of them stabilised by capacitors. The result is an increasing demand of external components, increasing PCB sizes and adding cost to the bill of materials.

Rohm has said that it will develop the technology to other analogue ICs to minimise environmental load.