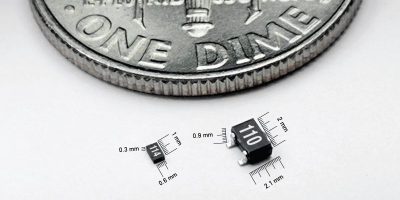 Designed for embedding in space-constrained consumer designs, like smart cards or hearing aids, the revised chip builds on Powercast’s existing Powerharvester receiver (PCC110), which has been deployed in industrial and commercial wireless power systems for seven years. The PCC114 receiver chip has a footprint of 1.0 x 0.6 x 0.3mm, which is seven times smaller than the existing PCC110 which measures 2.0 x 2.1 x 0.9mm. It also has 20 times less volume, for the design of compact, wirelessly-powered devices.

The PCC114 harvests the RF energy sent over the air from either an “intentional” or “anticipated” RF source, then converts it to DC to directly power a batteryless device or recharge a device’s batteries.

An intentional RF source is an RF transmitter in the home, office, public place or industrial setting, like Powercast’s PowerSpot far field transmitter which has a range of 80-feet and is FCC-approved. It creates a coverage area much like Wi-Fi and automatically charges enabled devices over the air when in range. Manufacturers can use the PowerSpot either in its standalone form or its sub-assembly and integrate it into their own products, or they can license Powercast’s technology and design their own RF transmitter.

Anticipated RF sources, such as UHF (ultra-high frequency) RFID inventory readers or NFC (near field communications) POS readers, could charge devices at the interaction point. The Powerharvester chip can harvest energy from the RF source at close range (centimeters for NFC or a few meters for UHF RFID) to power the device and enable contactless payment, ticketing, or data-change transactions. For example, using a typical RFID reader, Powercast’s Batteryless UHF retail price tag can be changed electronically from two meters (6.5-feet) away, and its multi-sensor RFID tags can be powered and read from 10 meters (32-feet) away.

Wireless power harvesting enables smart cards that can be recharged while in use, for example advanced security components like a fingerprint sensor, ePaper displays that retain data like balances or one-time PINs even when outside the power field, and hotel door access cards, loyalty/gift cards, or subway passes that become reusable/reloadable.

Operating across a wide RF power (-17 to +20dBm) and frequency (10MHz to 6.0GHz) range, the Powerharvester PCC114 converts RF to DC with up to 75 per cent efficiency, harvests from all modulation types, works with standard 50-Ohm antennae and is RoHS-compliant.

The Powerharvester chipset also includes the PCC210 boost converter IC, which works with both PCC114 and PCC110 Powerharvester wireless power receiver chips. The PCC210 comes in a SOT23-6 package, can work with inputs down to 0.4V, is capable of 5.5V at 50mA. It offers resistor-programmable output voltage.

Reference designs are available, and include schematics, PCB layout, bill of materials and performance data.