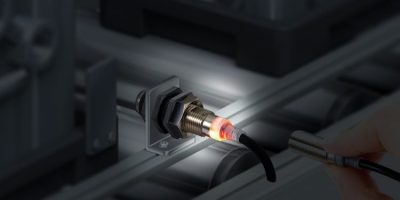 Proximity sensors with IoT features for predictive maintenance have been announced by Omron. The company has released a total of 2,512 models of its DC three-wire E2E Next series proximity sensors.

The sensors are also claimed to have the longest sensing distances, at least twice that of Omron’s previous offerings. This allows for more spacious design, reduces the risk of contact and improves facility operation rates, due to the prevention of stoppage and downtime.

Current proximity sensors characteristically have short sensing distances, which carries the risk, for example that equipment vibration may cause the sensor body to move too far away from or come in contact with the sensing object. Such incidents are said to account for approximately 20 per cent of facility stoppages.

The E2E Next series proximity sensors (DC three-wire models) are equipped with Omron’s own thermal distance control 2 and Prox3 hybrid circuitry technologies, which enable sensing distances that are at least twice as long as in previous models, and reduce risks of such facility stoppages by a factor of three. Distances between sensor bodies and sensing objects are constantly monitored, and users are notified via IO-Link communication if they become too great or too small. This allows users to identify warming signs of sudden facility stoppages and arrange timely maintenance.

Omron supplies control components and equipment, ranging from vision sensors and other input devices to various controllers and output devices such as servomotors, as well as a range of safety devices and industrial robots. Devices are combined via software.