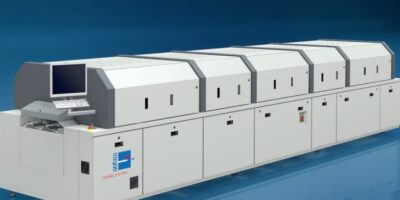 Soldering electronic assemblies creates solder fumes, aerosols and solid particles (residues) that need to be removed from the process cycle.

The concentration of volatile organic compounds in the process atmosphere can increase steadily, which entails a high risk of contamination and a high level of maintenance and repair activity. The VisionX series features two trusted residue management systems: pyrolysis in the heating zones and cold condensation and filtering in the cooling line. This ensures that residues in all states – gaseous, liquid, crystalline and particles – are removed from the process gas, effectively and economically in energy terms, says the company.

In the VisionXS and VisionXP+ models, residue management is via a combination of pyrolysis from the inflow to the peak zone plus cold condensation in the cooling line. In the pyrolysis process, long-chain molecule compounds in the solder fumes are broken down into short-chain molecules by thermal splitting when heated (450 to 900 degrees C). After cracking they are small enough to be deposited in the granulate and removed from the process.

The principle of cold condensation has also proven effective for gas cleaning in reflow soldering technology. In the VisionX series systems, it complements the pyrolysis (VisionXP+) or is responsible for the entire residue management (VisionXC). The process gas is fed through a multi-stage cooler-filter system in a closed loop, so that the residue can condense in the cooler while particles and droplets are deposited in the filter. The cleaned gas is then fed back into the process.