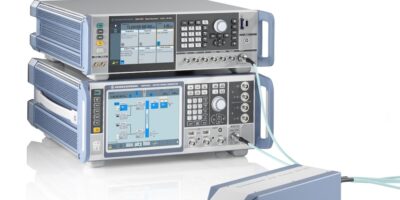 To enable continually higher data rates for end users of satellite links, satellite operators are using higher frequencies, such as the Q/V band, because it is here that larger bandwidths are available. Rohde & Schwarz now offers the R&S SZV100A RF upconverter for testing broadband transponders in the payloads of very high throughput satellites (VHTS).

The Q/V band offers larger bandwidths for feeder links to satellites, enabling the implementation of upcoming data links with high bit rates, such as future communications and cellular backhaul networks that can provide end users with large volumes of data. The band is also of interest to operators of conventional geostationary satellites and low earth orbit (LEO) satellites.

The R&S SZV100A has a 2GHz modulation bandwidth to cover the entire frequency range from 36 to 56GHz.

The demands placed on amplifiers, converters, receiver modules and complete satellite payloads in the Q/V band mean they must undergo extensive testing during development and verification.

The test equipment must meet very high requirements for signal quality, says Rohde & Schwarz. Used with the R&S SMW200A vector signal generator, the R&S SZV100A Q/V band RF upconverter provides continuous coverage of all satellite bands from VHF to V band as well as the frequency bands for 5G in the Q/V band.

The compact housing design, low weight and mounting points allow the R&S SZV100A to be mounted as close as possible to the device under test (DUT), for example on the outside of a thermal vacuum chamber (TVAC). The distance between the IF source or LO source and the R&S SZV100A can be as much as 10m, continues Rohde & Schwarz, allowing an optimised test set up.

The upconverter and the signal generators can be operated remotely with a PC software over a LAN connection, configured using the R&S SZV remote control software.

The R&S SZV100A is an inexpensive upgrade for existing test systems, says Rohde & Schwarz, while the control software enables the R&S SZV100A, R&S SMW200A and R&S SMA100B set up to be operated as a single instrument.

The R&S SZV100A is now available from Rohde & Schwarz.