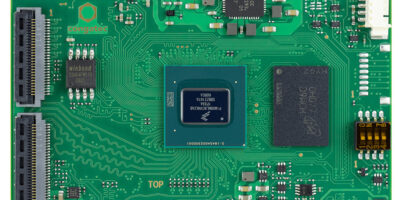 To celebrate the 15th anniversary of Qseven computer on modules (COMs), congatec has introduced the conga-QMX8-Plus Qseven module based on the NXP i.MX 8M Plus application processor.

It has been introduced as an upgrade for all NXP i.MX 6-based Qseven applications. It brings modern machine learning and AI (artificial intelligence) capabilities as well as time sensitive networking (TSN) support for real-time Ethernet to those applications, said congatec. It will also extend their lifetime by an additional 10 to 15 years.

The i.MX 8M Plus application processor has 1.8GHz Arm Cortex-A53 quad-core performance and an additional integrated neural processing unit (NPU) with up to 2.3Tera operations per second. There is also a DSP that enables speech recognition applications.

The first i.MX processor with a machine learning accelerator, the i.MX 8M Plus provides higher performance for deep learning inference and AI at the edge. Typical power consumption is just 3.0W. The conga-QMX8-Plus module is supported by the 64-bit architecture and onboard LPDDR4 memory with up to 6Gbyte.

The i.MX 8M Plus processor is enhanced with AES encryption for higher cyber security. There is also the Arm TrustZone which integrates the resource domain controller (RDC) for isolated execution of critical software, and secure high assurance boot (HAB) mode to prevent the execution of unauthorised software during boot.

The modules can control up to three independent displays, connected via natively supported HDMI 2.0a, LVDS 2x24bit and MIPI-DSI, and provide hardware accelerated video decoding and encoding including H.265 so that high resolution camera streams delivered by two integrated MIPI-CSI interfaces can be sent directly to the network. For onboard data storage, the modules provide up to 128 GB 5.1 eMMC, which can also operate in safe pSLC mode, as well as one onboard µSD socket. Peripheral interfaces include one PCIe Gen 3, one USB 3.0, three USB 2.0, four UART as well as one CAN FD and 14 general purpose I/O ports. For real-time networking, the module offers 1Gbit with TSN support. There are also two I2S for sound. The supported operating systems include Linux, Yocto and Android.

Target market applications are industrial controls, smart robotics and factory automation to medical health care and retail, and from transportation and smart farming to smart cities and smart buildings.