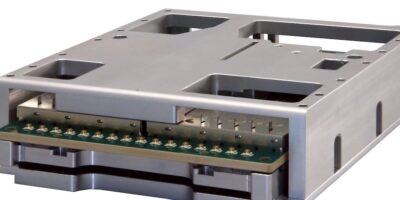 “The small size of these subsystems enables customers to install our Quartz RFSoC technology within their existing enclosures,” he added.

The Model 6350S and Model 6353S are self-contained RF converter and processing sub-systems in a small mounting frame. Requiring only a single 12V power supply, the sub-systems can be integrated as a component in a larger system with minimal design effort, says Pentek. All analogue I/O and control and communication interfaces are accessible with industry standard connectors, simplifying connections to other system components. The bottom surface of the sub-system provides an efficient thermal interface enabling conduction cooling and allowing fanless operation in most installations.

The small Model 6350S and Model 6353S sub-systems are optimised for size, weight and power (SWaP). They measure 1.5 x 4.6 x 6.7 inches 38 x 117 x 170mm and weight 30oz or 850g. The sub-systems are intended for use in customer provided enclosures, and can be deployed in challenging and harsh environments.

The Pentek Quartz architecture embodies a streamlined approach to FPGA products, simplifying the design for reduced power and cost, while still providing some of the highest performance FPGA resources available today, says Pentek.

Each 6.4Gsample per second 14-bit DAC includes a digital upconverter with independent tuning and interpolations of 1x, 2x, 4x and 8x. All ADCs and DACs are transformer coupled to wideband coax cable connectors.

The Model 6353S (Gen 3 RFSoC) boosts the input signal bandwidth to 6GHz using a 5Gsample per second 14-bit ADC with additional decimation settings. The DAC rate increases from 6.4 to 10Gsamples per second.

QuartzXM eXpress subsystems options for FPGA speed grade, and memory are in production now with delivery eight to 12 weeks after receipt of order.