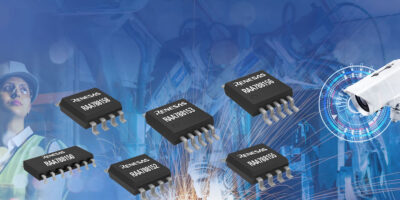 Claimed to have the industry’s highest electrical fast transient (EFT) immunity, the RAA78815x family of 5V RS-485/422 transceivers have been released by Renesas Electronics.

The differential transceivers deliver ±5000V EFT immunity and up to ±16,000V electrostatic discharge (ESD) immunity, making them suitable for a variety of industrial and automation applications.

There are six full and half duplex ruggedised devices in the series. All meet the RS-485 and RS-422 communication standards and can be used in industrial network, process control network, building automation, long-haul network, and security camera network applications.

The RAA78815x family are characterised by differential output voltage performance, says Renesas; for example 3.1V into the RS-485-required 54 Ohm load. The high speed transceivers also feature bus leakage currents of maximum 125 microA, representing a true 1/8 unit load to the RS-485 bus. Developers can connect up to 512 transceivers on the same bus without using repeaters and without compromising the RS-485 network standard’s 32-unit load maximum. As a result, the transceivers can lower implementation and downtime costs because a single network can support more nodes with lower likelihood of communications issues due to ESD and EFT over-voltage transients.

“EFT immunity is mission critical for devices operating in harsh industrial and automation environments, such as HVAC, factory, and smart grid equipment, where devices are frequently turned on and off or added and disconnected from the system” said Bobby Matinpour, vice president of the Standard Products Business Division at Renesas. “Featuring superior EFT immunity, output drive, and supply current levels, the RAA78815x family builds on 50 years’ experience in RS-485/422 transceiver design to deliver robust solutions for industrial and factory automation.”

The RAA78815x transceivers are available now in MSOP and SOIC packages with pin counts ranging from eight to 14. An evaluation board for the new transceiver family is also available.