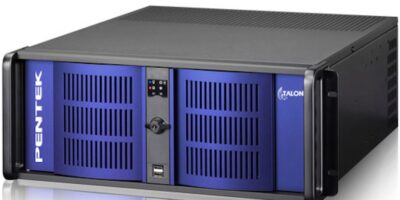 Featuring a turnkey record and playback system for wideband analogue RF/IF signals, the Model RTR 2742 is a 4U 19-inch rackmount recorder that Pentek has added to its Talon series of recorders.

It uses two 12-bit, 6.4GHz ADCs to achieve a sustained recording of 2.4GHz bandwidth signals at rates up to 6Gbytes per second. It can be configured as a one- or two-channel system and can record real samples or complex I+Q digitally down-converted samples.

There is also a 16-bit, 6.4GHz DAC for playing back analogue signal bandwidths up to 1.28GHz. Built-in digital down- and up-converters provide bandwidth and tuning frequency selection for both record and playback.

The Model RTR 2742 is designed for communications and radar applications which operate across wideband frequencies to digitise and record signals with bandwidths up to 2.4GHz. According to Rodger Hosking, vice-president, Pentek, it allows engineers to capture the whole spectrum in a single wideband channel, “eliminating the need to break up the signal into smaller bands, covering adjacent slices of the spectrum”.

The industrial grade 4U 19-inch rackmount chassis has  hot-swappable data drives, front-panel USB ports and I/O connectors on the rear panel and is ruggedised to operate in challenging environments.

The RTR 2742’s 12-bit 6.4GHz ADC can be clocked at rates from 1.6 to 6.0GHz in single-channel mode. Data can be truncated and packed as eight-bit samples, to support continuous recording up to the maximum sample rate. The DAC is capable of reproducing signals with up to 1.28GHz of instantaneous bandwidth and includes a range of interpolations. The RTR 2742 provides up to 122Tbyte of front panel removable solid-state storage for hours of real-time, high-bandwidth signal recording, adds Pentek.

All Talon recorders are built on a Microsoft Windows platform and include Pentek’s SystemFlow software, featuring a graphical user interface (GUI) for ease of operation, for example using point and click configuration management.  Configurations can be stored and recalled for single-click setup.

There is also the Signal Viewer and application programming interface (API). The Signal Viewer provides a virtual oscilloscope and spectrum analyser to monitor signals before, during and after data collection. The C-callable API allows users to integrate the recorder control into larger application systems.

The data format used for storage follows the NTFS standard, allowing users to remove drives from the instrument and read the data using standard Windows-based systems, eliminating the need for file format conversion.

A free of charge, trial package, the Talon Recording System Simulator, is offered for evaluation of the SystemFlow software package.