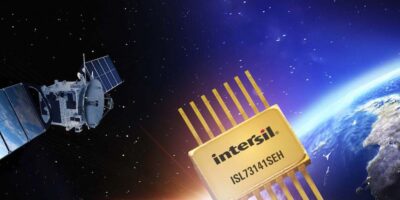 Claimed to be the highest performance, single-chip 14-bit, 1Msample per second, successive approximation register (SAR) ADC for radiation-hardened (rad-hard) space applications, the ISL73141SEH has been announced by Renesas.

It is claimed to deliver best in class dynamic and static performance, including signal to noise ratio (SNR), effective number of bits (ENOB), integral non-linearity (INL) and differential non-linearity (DNL). The ADC fully resets after every sample, clearing any errors that result from a single event upset (SEU) due to heavy ion radiation during spaceflight.

The ISL73141SEH delivers 1Msample per second throughput with no data latency and no missing codes. The 5V supply, dissipates only 60mW and it operates from a 3.3V supply at 750ksamples per second, dissipating only 28mW.

It operates across the full military temperature range of -55 to +125 degrees C.

The ISL73141SEH SAR ADC is available now in a 14-lead ceramic dual flatpack package. An evaluation board is also available.