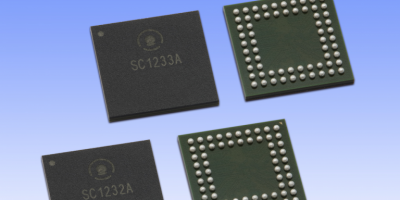 The compact S1230 sensor series includes two products that can detect the location and movement of individuals with high degrees of sensitivity. The SC1232AR3 measures the presence and the distance of an object and the SC1233AR3 additionally detects direction.

According to the company, incorporating basic signal processing functions, including an antenna, reduces the number of external components and makes the sensors easier to use without specialised knowledge in signal processing.

Radar sensors can detect location and movement of persons without recording images or sounds to develop new services and functions based on information about human behaviour, while also addressing privacy concerns. They are anonymous as the sensor operates without a camera for presence detection. It can operate behind non-metallic surfaces, walls or plastic housing and generate behavioural data such as movement, direction and distance. In comparison with conventional radar sensors, the SC1230 require no advanced knowledge to implement, says Socionext. They are also smaller, far less power-hungry and easier to install in home appliances.

The SC1230 sensors integrate built-in antenna, radio circuit, ADC and ranging calculation circuit. A built-in motion detection function detects the distance to an object and flags when movement is detected. Detection result can be quickly read after setting up the system from the host microcontroller via I2C/SPI. It operates at an average power consumption of approximately 0.5mW to detect people operating at 0.1 per cent duty cycle in motion detection mode.

The SC1232AR3 digital beam shaper feature enables field of view (FoV) selection of either 120 or 95 degrees. Detection range is eight meters in front of the sensor.

The SC1233AR3 is a dual receiving antenna system which allows 2D angle detection by using an external microcontroller. FoV is 120 degrees and the detection range is the same as the SC1232AR3. For angle detection, it outputs pre-processed data by the built-in circuit, so angle information can be obtained with a simple calculation.

FoV is half-value angle. FoV and detection range with the actual usage vary depending on the surrounding environment.

The two sensor options are available now in samples, with volume production scheduled for the first quarter of 2020.