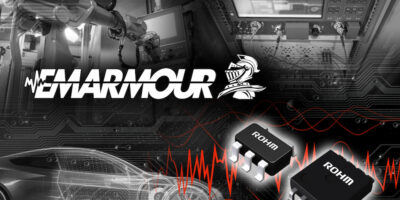 Rohm introduced the Emarmour series to prevent malfunctions due to noise without the need to take special application measures in automotive development. These latest BD8758xY op amps demonstrated superior performance under four international noise evaluation tests, reported Rohm. For example, in ISO 11452-2 radio wave emission testing conducted by vehicle manufacturers, the output voltage of standard products fluctuates by more than ±300mV in all frequency bands, but the BD8758xY series achieves ±10mV or less. At the same time, the CMOS element structure enables accurate, high speed signal amplification without being affected by external noise when installed inside the targeted sensor applications. This significantly improves reliability while reducing design production-hours in a range of applications, including anomaly detection systems, said Rohm.

The company also offers Real Model, a Spice model that matches the electrical and temperature characteristics of the IC and simulation values to prevent rework after prototyping. It is available on the company’s website.

The BD8758xY series can be used in automotive or  industrial applications which are sensitive to noise. For example, they are suitable for EV / HEV inverters, engine control units, eCall (vehicle emergency call) systems, car navigation or air conditioning systems. They can also be used in industrial factory automation equipment, measurement equipment, measuring instruments, servo systems, and sensor systems.

Rohm Semiconductor develops and manufactures a large product range from SiC diodes and MOSFETs, analogue ICs such as gate drivers and power management ICs (PMICs) to power transistors and diodes to passive components.