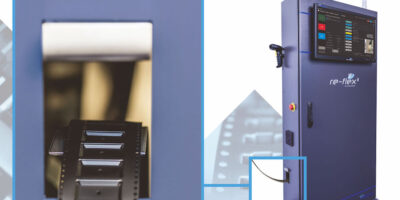 By producing carrier tape to specifications on site using Re-flex II, manufacturers can achieve a return on investment on materials alone within 12 months, as well as significant productivity and quality control improvements, claims the company.

Using Re-flex II, component manufacturers and vendors can form pocketed tape as and when needed. Usage modes allow the formed tape to be wound onto reels or delivered directly into a component packing process. Re-flex II owners can avoid the supply-chain issues encountered when sourcing pre-formed tape, while on-demand forming saves the space needed to store empty tapes waiting to be loaded. The system can produce both standard and custom tape pockets, with smart tooling that allows swapping between tape designs in minutes. The flexibility to switch between pocket forms helps simplify inventory, notes Adaptsys.

When supplying tape directly to a component packaging process, Re-flex II reduces the number of times the supply carrier tape needs to be changed, especially with deeper pocket parts. A conventional 22-inch (560mm) reel can hold 40m of tape pre-formed with 6.0mm deep pockets. At a component-taping speed of 2m per minute, the reel must be changed every 20 minutes. The Re-flex II supply reel contains up to 1000m of unformed tape, extending the changeover interval to eight hours. In other words, says Adaptsys, the reel can be changed once per shift, minimising operator intervention, reducing equipment downtime, and increasing productivity.