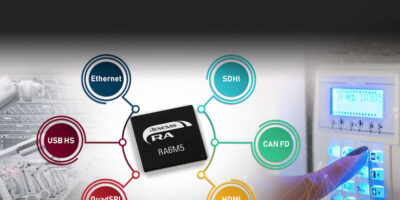 The memory block swap feature and intrinsic security in the RA devices are claimed to make the RA6M5 group particularly suitable for in-field firmware update applications. After new firmware is written to the flash using background operation, a selectable amount of 32kbyte flash blocks can be swapped to the new firmware.

They are also characterised by very Low power consumption of 107 microA/MHz in active mode (running the CoreMark algorithm from flash at 200MHz) and 30 microseconds wake up time.

The microcontrollers are scalable from 100- to 176-pin LQFP packages and also available in 176-ball BGAs.

The RA6M5 group is supported by the Flexible Software Package (FSP), which includes a best-in-class HAL driver, says Renesas. The FSP uses a graphical user interface (GUI) to simplify and accelerate the development process, while also making it easy for customers to transition from an original 8/16-bit microcontroller design. Designers using the RA6M5 microcontrollers also have access to the extensive Arm partner ecosystem, offering a wide range of tools that help speed time-to-market.

The RA6M5 microcontrollers and the EK-RA6M5 evaluation kit (RTK7EKA6M5S00001BE) are available now from Renesas and its worldwide distributors.