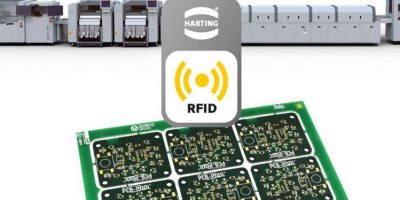 Error rate is reduced and documentation is simplified, using an auto-ID system developed by Harting.

The RFID system allows PCBs to communicate with a surface mount technology production line and contains all the relevant manufacturing data. It is based on Harting’s RFID-4-SMT auto-ID. According to Harting, the system cuts error rates, radically simplifies documentation requirements and forms the basis for automated PCB production in a batch size of one.

When the PCB is first produced, a small UHF RFID chip is inserted in the blank or attached as a component later on. From this point, manufacturing data can be written to and read from the RFID chip at each station in the manufacturing process. Even unplanned events such as machine malfunctions can be stored, adds Harting.

The coaxial-cable-based Ha-VIS Lochfield antenna and the Ha-VIS RF-R350 flexible UHF RFID reader are based on Harting’s Mica industrial computing platform. The antenna field follows a coaxial conductor and allows communication with several PCBs in a single PCB panel at full manufacturing speed.

The reader and antenna can be integrated into both new and old systems. The compact design and IP67 protection class also facilitate upgrading. Full data integration in the manufacturing system is possible – but not absolutely necessary – at any time.

The modular and open software architecture of the Ha-VIS RF-R350 UHF RFID read-write device allows the data to be pre-processed in the reader. The data is stored in line with ISO standards and the GS1 standards applied to commercial goods transport. This applies for the ID of the PCB itself, but also for the processing and manufacturing data stored in the user memory of the RFID chip. This data is transparent and can be used later by a third party.

Once the UHF RFID technology has been fitted on the PCB, it can be used throughout its lifetime. Several PCBs can be read in bulk without optical contact, for example, through foil and cardboard packaging, which makes the technology eminently suitable for warehouse and logistics processes. The information can also be read when the PCB is already installed in the application. Provided that the housing does not consist entirely of metal and certain basic physical principles are adhered to, the information on the RFID chip can continue to be used and updated.