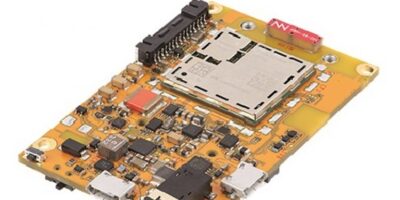 The mangOH Yellow with soldered WP7702 Cat-M1/NB-IoT module with SIM card is the latest, and smallest, mangOH platform for sending edge data to the cloud. It enables designers to build low-power IoT applications that can run for 10 years on a battery.

It is compact and has a snap-in socket to add any CF3-compatible modules, including wireless modules (2G to 4G and LTE-M/NB-IoT, GPS). An IoT expansion card slot is included to plug-in any technology based on the IoT expansion card open standard.

The module also has built-in Wi-Fi b/g/n and Bluetooth 5.0 with Bluetooth Low Energy, Bluetooth mesh and NFC tag, together with built-in antennae for cellular, GPS, Wi-Fi, Bluetooth and NFC.

There is also a selection of sensors, including temperature, pressure, humidity, acoustic mic, air index quality and light versions, an accelerometer, a gyroscope and a magnetometer.

Richardson RFPD is an Arrow Electronics company, specialising in the RF, wireless, IoT and power technologies markets. It represents many of the industry’s top radio frequency and power component suppliers. It has design centres worldwide for customers designing components or engineering complete solutions, and a technical sales team to provide comprehensive support for customers, from prototype to production.