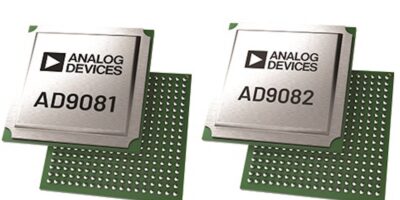 By shifting more of the frequency translation and filtering from the analogue to the digital domain, the AD9081 and AD9082 provides designers with the software configurability to customise radios.

ADI’s MxFE platform processes more of the RF spectrum band and embeds DSP functions on-chip to enable the user to configure the programmable filters and digital up- and down-conversion blocks to meet specific radio signal bandwidth requirements. This results in a 10 fold power reduction compared to architectures that perform RF conversion and filtering on the field-programmable gate array, while freeing up valuable processor resources or allowing designers to use a more cost-effective FPGA.

The new AD9081 and AD9082 MxFE platform can be used for a range of applications, including wireless communications infrastructure, microwave point-to-point, E-band and 5G mmWave, broadband communications systems, DOCSIS 3.1 and 4.0 CMTS, phased array radar and electronic warfare and electronic test and measurement systems.

Richardson RFPD is an Arrow Electronics company and specialises in the RF, wireless, IoT and power technologies markets. It has relationships with many of the industry’s top radio frequency and power component suppliers.