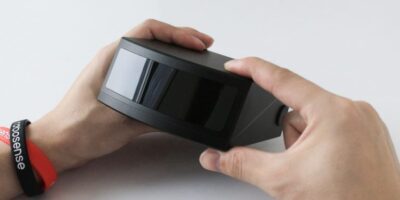 The RS-LiDAR-M1Simple is less – with dimensions of 110 x 50 x 120mm or 4.3 x 1.9 x 4.7-inch, is half the size of the previous version. It is equipped with an artificial intelligence (AI) perception algorithm that takes advantage of lidar’s potential to transform conventional 3D lidar sensors to a full data analysis and comprehension system, providing semantic-level structured environment information in real-time for autonomous vehicle decision making.

“The RS-LiDAR-M1 is an optimal choice for the serial production of self-driving cars,” said Mark Qui, chief operating officer at RoboSense. “The sooner solid-state lidar is used, the sooner production will be accelerated to mass-market levels,” he added.

The system has 125 laser beams for a field of view of 120 degrees; this is the MEMS solid-state lidar’s largest field of view among released products worldwide, claims the company. RoboSense uses 905nm lasers which are cost-efficient, automotive grade and small in size instead of expensive 1550nm lasers. It also reports ranging ability limits to 150m at 10 per cent, which is also MEMS solid-state lidar’s longest detection range, says the company. The frame rate of RS-LiDAR-M1 is increased to 15Hz, which can reduce the impact of point cloud distortion caused by target movement.

The solid-state lidar has been reduced by half and is one-tenth the size of conventional 64-beam mechanical lidar. The RS-LiDAR-M1 can be easily embedded into the car’s body while still maintaining the vehicle’s appearance, confirmed RoboSense.

According to the AEC-Q100 standard, combining the characteristics of MEMS micro-mirror, a total of 10 verification test groups are designed covering temperature, humidity, packaging process, electromagnetic compatibility, mechanical vibration and shock and lifetime. The cumulative test time for all test samples has now exceeded 100,000 hours.

The longest-running prototype has been tested for more than 300 days, while the total road test mileage exceeds 150,000km with no degradation found in various testing scenarios, reports RoboSense.

The RS-LiDAR-M1 was tested for rain and fog under different light and wind speed conditions. It met the standards and the final mass-produced RS-LiDAR-M1 will adapt to all climatic and working conditions.

As a solid-state products, the RS-LiDAR-M1 has minimal wear and tear compared with movable mechanical structures, eliminating potential optoelectronic device failures due to mechanical rotation. The characteristics of solid state provide a reasonable internal layout, heat dissipation, and stability, adds RoboSense, another advantage over mechanical lidar.

The RS-LiDAR-M1Smart is a comprehensive system with sensor hardware, AI point cloud algorithm, and chipsets, for an end-to-end environment perception system. RoboSense’s AI perception algorithm injects the sensor with structured semantic-level comprehensive information, focusing on the perception of moving objects.

The coin-sized module processes the optical-mechanical system results to meet autonomous driving performance and mass production requirements, explains the company. Parts have reduced from hundreds to dozens compared to traditional mechanical lidar, to result in reduced cost and production time.

The smart sensor version of the RS-LiDAR-M1 is currently available for key customers who have purchased the solid-state LiDAR A-C sample kit, and will be available to all customers after Q1 2020.