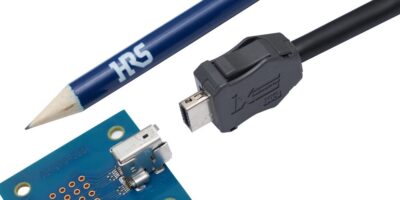 The ix Industrial series of I/O connectors have been developed by Hirose for use in space-constrained industrial applications requiring high-speed signal transmission up to 10Gbits per second.

The connector series reduces functional space by up to 75 per cent and footprint by two-thirds compared to RJ45 solutions, says the company. They also support CAT5e (1Gbits per second) and CAT6A (10Gbits per second) cabling.

The ix Industrial series I/O connectors’ EMI/ESD shielding design is optimised for secure data transmission up to 10Gbits per second.

The series is compliant with the standard IEC 61076-3-124. Models in the range have receptacles and plugs with two keying codes, differentiating Ethernet according to IEEE 802.3 from other applications.

There are two receptacle types within the variations. The upright right angle type can be mounted in parallel with a pitch distance of only 10mm to save space. The vertical type allows the mating plug to be mated from the top giving design flexibility.

A horizontal right angle type is currently being developed. This model is designed with a height of 5.7mm, less than half the height of Hirose’s RJ45 connector. This version is intended for use in devices where height is limited. It can also be used for thin-type control panels and FA control equipment.

The receptacle shell is mounted on the board via through-hole solder legs to enhance the retention to the board and to resist the wrenching of the cable assembly, protecting the surface-mount contacts.

The plugs are available in IDC and solder type. The wire-termination unit and cable clamp are integrated into a continuous metal shell, which prevents the connecting part of the cable assembly from being affected by the load on the cable.

Other design features are 10 contact, and a current rating of 1.5A or 3.0A if only fur pins are used.

The voltage rating is 50V AC / 60V DC. The robust connectors are tested to 5,000 mating cycles and to withstand an insertion/extraction force of 25N.

The connectors are RoHS-compliant and have an operating temperature range of -40 to +85 degrees C.