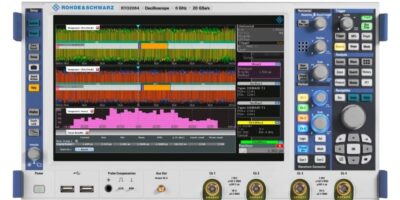 Increased levels of radar, lidar and camera sensors in automobiles mean that large amounts of sensor data needs to be transferred and processed within a few milliseconds.

To perform precise timing measurements on in-vehicle networks with nanosecond accuracy for Layers 1 to 3, Rohde & Schwarz provides a tailored oscilloscope based on the R&S RTO, while TSN Systems contributes TSN Box, a hardware interface to the network and TSN Tools, a measurement and analysis software.

The test set-up monitors an automotive Ethernet 100BASE-T1 communication link consisting of TSN Box 3.0 acting as talker, listener and test access point (TAP) device. The TSN Box 3.0 TAP device provides information to a PC with TSN Tools based on Layers 2 and 3. The TAP introduced 2x PHY delay for 100BASE-T1 at around 1.5 microseconds ±10 nanoseconds. The R&S RTO oscilloscope was used along with the R&S RTx-K35 bus measurements statistics option to measure and verify timing accuracy in the physical layer of the automotive Ethernet signal (Layer 1). The mean time delay was measured to be precisely 1.5 microseconds with a max deviation of ±10.2 nanoseconds. The Qbv traffic (IEEE802.1) was generated by the TSN Box 3.0 with 500 microseconds cycle time resulting in a jitter ranging from eight to 20 nanoseconds, which was verified by both the TSN Tools and the R&S RTO.

TSN Tools is a PC-based analysis software performing visualisation and deeo detail analysis. TSN Box serves as a precise interface to the link. Based on its configuration, it can act as a generic TSN talker/listener device with nanosecond precision. The TAP can transparently synchronise itself to the gPTP master in the network. This allows very powerful applications that need correlation between payload time stamps and TAP time, says Rohde & Schwarz.

The R&S RTx-K35 software option enables high precision latency measurements, for example monitoring the communication between two devices for a long period, and provides statistics on error rates as well as frame timing on the packets. The R&S RT-ZF7 test fixture allows full monitoring between the transmitter and receiver device in both directions using the oscilloscope.

In combination with the suitable decoding option, the 100BASE-T1 time data can be measured frame-to-frame. Engineers can get full bus error statistics such as frame error rate and rate of consecutive errors. Moreover, they can perform precise timing measurements for all automotive serial bus protocols such as automotive Ethernet, CAN, CAN-FD, LIN and I2C.