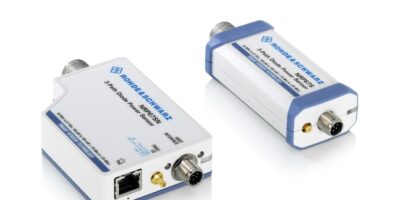 The NRP67S and NRP67SN power sensors introduce a frequency range from 50MHz to 67GHz. The three-path diode sensors also have a wide dynamic range from -70 to 20dBm and a high measurement speed of 10,000 measurements per second. In addition to the fast power measurements, Rohde & Schwarz claims they also offer “unsurpassed accuracy and dynamic range previously not possible at these frequencies”.

The power sensors can be used for most wireless infrastructure power measurements, supporting the latest WiFi and Wireless HD standards which operate above 57GHz, as well as practically all other wireless communication technologies in use, says the company.

The portable power sensors are particularly suitable for installation, maintenance, or monitoring applications, both locally or remote. They can be used connected to an R&S NRX power meter, selected Rohde & Schwarz signal generators and analysers, or a PC with the R&S NRPV virtual power meter software installed.

The NRPxxSN power sensors include an Ethernet interface to support remote operation via LAN.

The NRP67S and R&S NRP67SN power sensors are available now.

Rohde & Schwarz specialises in test and measurement, broadcast and media, aerospace, defence, security and networks and cybersecurity. The company’s communications, information and security products are used by customers in industry and government.

The company is headquartered in Munich, Germany, and has subsidiaries in more than 70 countries, with regional hubs in Asia and America.