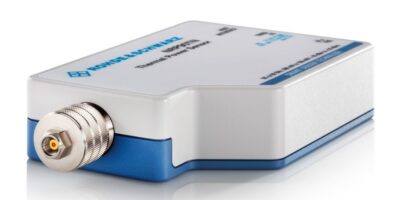 NRP90T and NRP90TN models of thermal power sensors are believed to be the first test and measurement instruments to support the robust 1.35mm precision coaxial connector. The connector covers frequencies up to 90GHz and will be included in the next releases of both IEEE and IEC relevant standards, says Rohde & Schwarz.

The company has been a partner in the 1.35mm E connector development project since it began in 2017. The project includes Germany’s national metrology institute, the Physikalisch-Technische-Bundesanstalt (PTB), Rohde & Schwarz, Rosenberger Hochfrequenztechnik and Spinner, working together to develop a coaxial connector optimised for E-band frequencies. Such a cable connector is suitable for industrial applications at frequencies up to 90GHz including emerging applications such as automotive radar from 76 to 81GHz and the WiGig extension IEEE 802.11ay operating up to 71GHz.

The 1.35mm E connector has a precise metric fine thread, a reliable pin gap and an integrated groove for optional push-pull locking. The design was accepted in 2019 for the next edition of the IEEE 287-2007 for precision coaxial connectors, and also by the IEC, which will publish it as the IEC 61169-65.

Rohde & Schwarz has implemented the E connector for the first time in a test and measurement instrument. The R&S NRP90T and R&S NRP90TN for frequencies up to 90GHz are claimed to feature both the highest accuracy and fastest speed of measurement available for thermal power measurements. The R&S NRPxxT power sensors operate locally, connected to a PC, selected Rohde & Schwarz instruments, or an R&S NRX base unit. The R&S NRPxxTN sensors can also be operated remotely via a local area network (LAN).