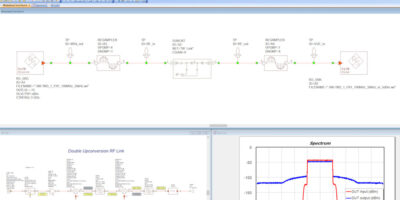 Development of RF components is accelerated with the Rohde & Schwarz VSEIM-VSS signal creation and analysis tool, developed in partnership with Cadence Design Systems.

The tool simplifies the RF design to implementation process and increase accuracy for both simulation and testing, says Rohde & Schwarz. It is intended for use by developers in the wireless, automotive and aerospace and defence industries as well as for manufacturers of active components and systems.

The VSESIM-VSS signal creation and analysis tool supports all major standards such as 5G and the latest Wi-Fi evolutions. It combines signal generation, design simulation and signal analysis, to provide developers with a tool that allows them to address design challenges earlier in the development process.

The VSESIM-VSS signal creation and analysis tool functions as an addition to the Cadence Visual System Simulator (VSS) software, which is used for system simulation and modelling, particularly for RF components and RF assemblies in wireless communications and radar design. The tool expands the VSS software capabilities by adding realistic signals to the workflow, increasing simulation accuracy.

The VSESIM-VSS includes R&S WinIQSIM2 simulation software, for testing operative circuits, modules and devices, and the R&S VSE vector signal explorer software. It additionally adds plug-ins for Cadence electronic design automation (EDA) tools. The data sink plug-in from Rohde & Schwarz provides access to the signal at any point in the design process. The signal can be transferred to a vector signal generator and applied to available hardware, enabling system level analysis of hybrid hardware / simulated implementations.

The VSESIM-VSS supports direct digital pre-distortion (DPD) techniques to verify the effects of linearization already in the simulation phase of power amplifier development.

Signal generation and analysis provided by the Rohde & Schwarz solutions can also be used in other connected Cadence products such as the Cadence Microwave Office circuit design software or the Cadence Virtuoso RF Solution for RFIC and RF modules.