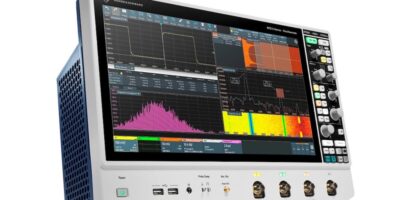 The R&S RTO6 is also claimed to offer 9.4 ENOB, an unparalleled update rate of one million waveforms per second and a comprehensive toolset of analysis functions. The RTO6 digital oscilloscope offers six bandwidth models from 600MHz to 6GHz and a sample rate of up to 20Gsamples per second. It is designed for time and frequency testing, as well as protocol and logic analysis. It has a high waveform update rate, a powerful digital trigger and responsive deep memory, adds Rohde & Schwarz.

The user interface has been redesigned for increased productivity. The 15.6-inch full HD screen has a touch functionality and a redesigned front panel for test engineers to quickly set up measurements. The large screen can display a maximised waveform viewing area, and signals can be dragged and dropped to different parts of the screen using R&S SmartGrid. The app cockpit provides access to all of the oscilloscope’s applications with a single tap.

Rohde & Schwarz has also implemented an architecture with a dedicated ASIC for optimised signal processing that delivers an exceptional acquisition rate of up to one million waveforms per second. This allows users to reliably detect even sporadic signal faults. A low noise front end and single-core ADCs have small linearity errors to ensure signal integrity with a spurious-free dynamic range (SFDR) of 65dBc and 9.4 ENOB to capture signal details with maximum precision.

More signal details can be revealed using the high definition (HD) mode. This increases the vertical resolution up to 16bit with digital filtering for sharper waveforms and less noise. This filtered 16-bit signal is also used by the patented digital trigger system for trigger sensitivity and the capability to isolate even the smallest signal details.

To deliver quick results, there are mask tests, which users can set up with simple touch gestures. The RTO6 also allows signal anomalies to be easily identified within defined tolerance limits and the zone trigger means events can be graphically isolated in both the time and frequency domain.

More than 90 measurement functions are included in the R&S RTO6 series, organised into amplitude and time measurements, jitter, eye, histogram and spectral measurements. In addition, multiple application-specific software options for complex measurements, including triggering and decoding of serial protocols, automated compliance tests on high speed digital interfaces, detailed options for jitter analysis and power analysis, as well as spectrum, power, TDR/TDT and signal analysis. These options can be unlocked with a keycode as testing requirements evolve.