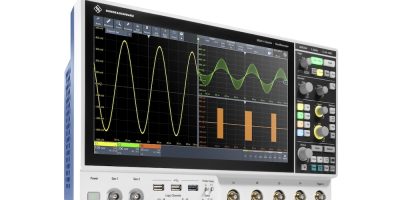 A series of oscilloscopes delivers a number of industry firsts, said Rohde & Schwarz. The MXO 4 series oscilloscopes are claimed to have the world’s fastest real time update rate, show more signal detail and infrequent events than with any other oscilloscope, more resolution at all sample rates without any trade offs for more precise measurements and a standard acquisition memory of 400 Mpoints on all four channels for up to 100 times the standard memory of comparable instruments, said the company.

According to Rohde & Schwarz they have the world’s fastest update rate of 4.5M acquisitions per second, revealing more signal activity than any other available oscilloscope. This allows development teams to quickly see and isolate infrequent events, get a better understanding of physical layer signals and test faster.

An ASIC capable of processing 200Gbits per second is one new technology introduced with the oscilloscopes.

They incorporate a 12-bit ADC that operates across all the instrument sample rates with an 18-bit vertical resolution architecture for greater precision than any other oscilloscope, said Rohde & Schwarz. The MXO 4 series also has the lowest noise and largest offset range (±5V with a 500uV/div scaling) in its class, said the company, for viewing DC and other signals with more precision.

To capture more time and retain rated bandwidth information for shorter time base settings, the MXO 4 series oscilloscopes have a simultaneous standard acquisition memory of 400 Mpoints on all four channels, which is up to 100 times the standard memory of the nearest competitor, claimed the company. The additional memory also provides extra measurement capability when needed.

The digital trigger, typically available only in higher performance, more expensive oscilloscopes, is a standard feature on all R&S MXO 4 series oscilloscopes. The trigger sensitivity of 1/10 000 division can isolate difficult-to-find small physical layer anomalies in the presence of large signals. The company said, no competitive oscilloscope has this degree of trigger sensitivity for isolating small signals. The digital trigger complements the 18-bit vertical architecture for precision measurements.

To debug products and test in both the time and frequency domains, the MXO 4 series oscilloscopes has time domain measurements and RF spectrum measurement capabilities. They are claimed to be the first oscilloscopes to perform 45,000 FFTs (fast Fourier transforms) per second. Comparable oscilloscopes deliver fewer than 10 FFTs per second, pointed out the company.

The oscilloscopes feature a 13.3-inch full-HD capacitive touchscreen and an intuitive user interface. The small footprint oscilloscopes can be used in most working environments with low audible noise, VESA mounting and a rackmount kit for installation in integrated environments.