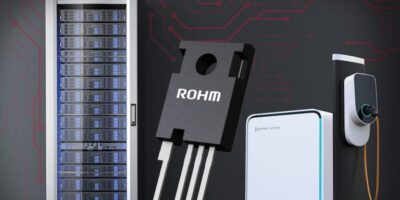 Six trench gate structure SiC MOSFETs from Rohm are presented in new four-pin packages. The SCT3xxx xR series has up to 35 per cent lower switching loss over conventional packages and to reduce device power consumption, says the company.

The SCT3xxx xR series uses the TO-247-4L package, that maximises switching performance, says Rohm. It is possible to reduce switching loss by up to 35 per cent over conventional three-pin package types (TO-247N).

According to Rohm, the growing needs for cloud services due to the proliferation of artificial intelligence (AI) and IoT has increased the demand for data centres worldwide, but a major challenge is how to reduce power consumption as capacity and performance increase. SiC devices have smaller loss over mainstream silicon devices in the power conversion circuits of servers, reports Rohm. The TO-247-4L package with reduced switching loss compared with conventional packages, is expected to be adopted in high output applications such as servers, base stations, and solar power generation.
Rohm has also introduced an SiC MOSFET evaluation board, P02SCT3040KR-EVK-001, equipped with gate driver ICs (BM6101FV-C) and multiple power supply ICs and discrete components optimised for SiC device drive.