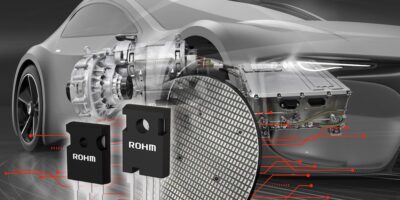 The capacity of on-board batteries in EVs is increasing, allowing an improvement in cruising range and the use of higher voltage batteries (800V) is progressing to meet the demand for shorter charging times. Improving efficiency while decreasing the size of the main inverter remains one of the most important challenges, says Rohm.

For power semiconductors there is often a trade-off relationship between lower on resistance and short circuit withstand time, which is required to strike a balance for achieving lower power losses in SiC MOSFETs. Rohm says it was able to improve this trade-off relationship and reduce on resistance per unit area by 40 per cent over conventional products without sacrificing short circuit withstand time by further improving an original double trench structure. Significantly reducing the parasitic capacitance (which is a problem during switching) makes it possible to achieve 50 per cent lower switching loss over our previous generation of SiC MOSFETs.

Rohm’s fourth generation SiC MOSFETs are capable of delivering low on resistance with high-speed switching performance, contributing to greater miniaturisation and lower power consumption in a variety of applications, including automotive traction inverters and switching power supplies. Bare chip samples are available now, with discrete packages to be offered in the future.