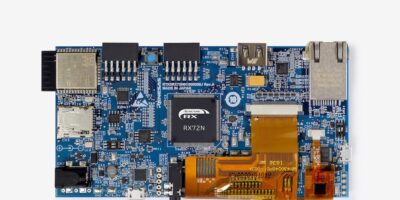 Distributor, RS Components has announced that it is now stocking the second-generation development platform from Renesas Electronics, the RX72N Envision kit.

The kit is based on the Renesas RX family’s RX72N 32-bit microcontroller. This microcontroller features Renesas’ third-generation RX CPU core, the RXv3, which has been designed to deliver improved performance and faster interrupt response. Hardware accelerators for trigonometric calculations increase the speed of motor control applications, and an integrated TFT LCD controller and 2D drawing engine make full use of the kit’s display. For security, there is the integrated security hardware IP, Trusted Secure IP. This provides a cryptography engine to realise AES, RSA, ECC as well as secure key management to protect keys and ID.

The kit supports Ethernet, Bluetooth and Wi-Fi connectivity. For both wired and wireless network connections, there are integrated Ethernet controllers and various serial interfaces.

Embedded emWin middleware from Segger supports its GUI software package. There are also two demonstration applications based on FreeRTOS from AWS.

To accelerate development cycles, the board also integrates an E2 Lite emulator. The RX72N microcontroller can run two applications thanks to its 4Mbyte dual bank flash memory. There is also 1Mbyte of SRAM. For further expansion, a microSD card interface and PMOD connectors are also included.

The RX72N Envision Kit is shipping now from RS in the EMEA and Asia Pacific regions.