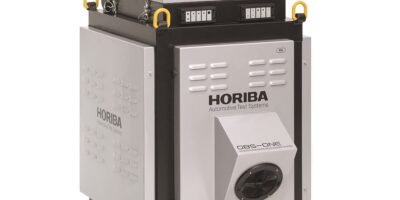 The OBS-ONE-RE enclosure enables the OBS-ONE to be used for monitoring the exhaust gases of machinery such as diggers, quarry vehicles, snowmobiles, inland water vessels and portable power generating sets.

Les Hill, Manager of Horiba’s Global Product Planning Group said that the in-service monitoring of NRMMs became mandatory, following the European Commission’s 2016 EU Stage V legislation for Non-Road Mobile Machinery  The aim is to monitor for discrepancies between engine-under-test emissions established in the laboratory and real-world emissions when the engine is installed in equipment and in use, he explained.

The OBS-ONE measures concentration levels of gaseous emissions – specifically carbon monoxide (CO), carbon dioxide (CO2), total hydrocarbons (THC), nitrogen oxides (NOx) and nitrogen dioxide (NO2) and particle number (PN). It also measures the exhaust flow rate, environmental conditions (atmospheric temperature, humidity and pressure) and GPS data to provide a record of not just the emissions but also the conditions and the location at which the data was captured.

The OBS-ONE-RE enclosure features high endurance and reliable springs that protect the OBS-ONE from shock and vibration in all three axes. It is also weather-proof, has dust filters and a cooling system that maintains a consistent internal temperature; enabling the OBS-ONE-RE to operate over the range -7 to +40 degrees C.

Built-in Wi-Fi allows the OBS-ONE-RE to be operated and monitored remotely, enabling the NRMM driver to concentrate on the vehicle or machinery operation.

The enclosure can protect the OBS-ONE from the harsh environments in which many NRMMs, and some HDVs operate and which must now be monitored under industry regulations.