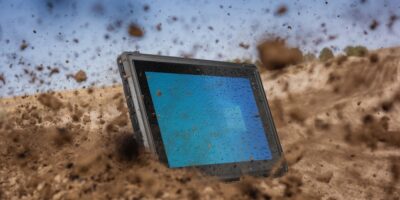 A rugged tablet from WeRock Technologies is compact for can mobile manufacturing, automotive, defence, public safety, utilities, and transportation and logistics use.  The Rocktab U210 combines a robust design with the user-friendliness of consumer tablets, says WeRock Technologies.

An Intel Celeron N4120 or Pentium N5030 quad-core processor is supported by 8Gbyte RAM. According to WeRock, the Rocktab U210 is almost three times as fast as Atom processors usually used for tablets. There is 128Gbyte of internal storage available, which can be expanded via a micro SD card.

For connectivity, the Rocktab U210 has a USB 3.1 Type A, USB C port, micro SD card slot, micro HDMI and a GbE port. The built-in 2 x 2 MU-MIMO WLAN adapter supports 802.11ax and is WiFi 6-certified and enables data rates of up to 2.4Gbits per second. The integrated Bluetooth 5.2 can be used for different applications, from connecting barcode scanners and augmented reality (AR) applications to vehicle diagnostics or indoor navigation. For outside use, the optional industry-grade 4G LTE connectivity offers download speeds of up to 300Mbits per second. Integral GPS is from uBlox.

The tablet is designed with a replaceable battery and a total battery capacity of 38Wh for a runtime of up to 10 hours with a single battery charge. In addition to hot-swap functionality, there is a 65W power supply for quick recharging.

The tablet weighs less than 1kg (996g) and just 15mm thick. It is, says the company, one of the slimmest devices in its class and is close to a consumer tablet level. It is optionally available with Windows 10 IoT Enterprise, Windows 10 Professional or Ubuntu 20.04 Linux. It is also compatible with the upcoming Windows 11 OS.

The tablet exceeds the usual military standard, says WeRock and is certified to MIL-STD-810G. Instead of the usual 1.2m drop height, the Rocktab U210 survives drops of 1.5m. It was also subjected to a so-called drum test. In this test, the tablet has to survive 40 consecutive drops from a height of 1m, to check the drop resistance in everyday use. The Rocktab U210 is also certified according to class IP65 and guarantees full protection against dust and water penetration.

The Rocktab U210 features a 10.1-inch full-HD display with up to 800 nits of brightness. According to WeRock, it has more brightness and better contrast ratios than other fully rugged tablets currently available, with “exceptional durability and excellent reading, even in bright sunlight”.

The tablet has a capacitive touchscreen made of reinforced glass which is built to exceed IK06 impact resistance. The tablet is gesture-enabled to capture signatures. (A digitiser input pen is optionally available.) The tablet can also be operated in the rain and with gloves.

An optional 2D barcode scanner “disappears” into the front edge of the tablet.