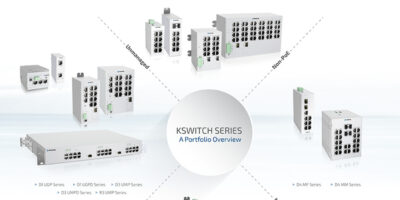 Designed for harsh industrial environments, Kontron‘s KSwitch family of industrial-strength Ethernet switches (fast, Gigabit or 10G Gigabit) can be used for wired Ethernet connectivity at the edge. There are 11 series available from Rutronik, suitable for a range of configurations for various fields of application, e. g., industrial automation, IIoT, infrastructure and communication. The single-chip design optimises reliability and cost efficiency, as well as reduces power consumption and size, says the distributor.

The KSwitch series offers a variety of configurations from rack to DIN rail mounting, with or without PoE injection, cost-effective unmanaged configurations, as well as switches to be managed via a web interface.

All models can be used in industrial environments that experience a high temperature range. The standard RJ45 and small form-factor pluggable (SFP) connectors simplify the selection and use of cables and fibre optics, claims Rutronik.

There is also the KSwitch R3 UMP series of unmanaged Ethernet switches with up to 16 PoE ports and Layer 2 fibre port.