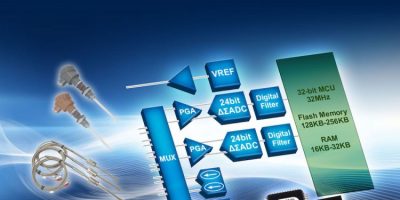 The first RX microcontrollers with integral analogue front end have been announced by Renesas Electronics. The RX23E-A microcontrollers are intended for high-precision sensing and measurement equipment.

The 32-bit RX microcontrollers are designed for applications that require high-precision measurements of analogue signals for temperature, pressure, weight, and flow. According to Renesas, they enable such signals to be measured with better than 0.1 per cent precision without calibration.

They achieve analogue front end precision with offset drift of 10 nV/ degrees C, gain drift of one ppm/ degrees C, and RMS noise of 30nV rms. According to Renesas these deliver a level that could previously only be achieved by combining dedicated ADC circuits with high-precision operational amplifier ICs. By integrating high-precision analogue front end intellectual property (IP) on a single chip using the same fabrication process technology, Renesas has made it possible to implement sensor measurement, computation, control, and communication on a single chip to reduce the number of required components, save space, and simplify system design in equipment such as temperature controllers, recording, weighing, and force sensing devices. It also accelerates endpoint intelligence by enabling distributed processing with microcontrollers.

To improve productivity, factories and manufacturing sites are required to measure a variety of sensor data accurately and reliably. For stability when measuring small signals at high precision over a wide environmental temperature range, it is important to reduce noise characteristics and temperature drift characteristics, which prompted Renesas to develop the high-precision analogue front end and integrate it into an RX microcontroller.

The RX23E-A microcontrollers are based on the RXv2 core, which has operating speeds of 32MHz, a digital signal processor (DSP), and superlative floating point unit (FPU) calculations. This allows the implementation of adaptive control using temperature data and inverse matrix calculations using six-axis distortion data.

The analogue front end block has a 24-bit delta-sigma ADC which has up to 23 bits of effective resolution. Two ADCs can start synchronously, allowing sensor temperature correction to be performed without switching channels.

A rail to rail input programmable gain amplifier allows amplification up to x128, there is also analogue differential inputs of up to six channels (pseudo-differential) and up to 11 channels (single-ended inputs), all of which can be used as inputs to the two ADCs.

The microcontroller block has a 32-bit RXv2 core operating at 32MHz, 128 to 256kbyte of ROM and 16 to 32kbyte of RAM, as well as one SPI, one I2C and one CAN channel and four channels of UART for communication interfaces.

The RX23E-A microcontrollers are supplied in a 48-pin QFP and 40-pin QFP.

Samples of the RX23E-A microcontrollers are available now with mass production planned for December 2019.