Ryzen Embedded V2000 Processors have up to eight CPU cores 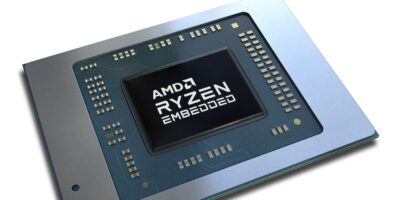 The latest processors offered by AMD, the Ryzen Embedded V2000 series, deliver double the cores, up to two times performance/W and an estimated 15 per cent IPC uplift, compared with the previous generation, says the company.

AMD is continuing its 10-year planned availability as with its other Ryzen Embedded processors.

There is also support for rich multimedia capabilities, with an ecosystem that includes key customers and partners. Initial launch partners include Advantech, ASRock Industrial, iBase and Sapphire.

AMD was founded in 1969 as a Silicon Valley start-up. It began with dozens of employees focused on leading-edge semiconductor products. Today it is a global company with a vision for high performance computing to transform lives.

AMD has achieved many important industry firsts and today develops high-performance computing and visualisation products to solve some of the world’s toughest and most interesting challenges.

AMD believes: “There has never been a better time to be in the semiconductor industry, and we are ready to tackle the next 50 years with high-performance computing and graphics solutions that transform all of our lives“.