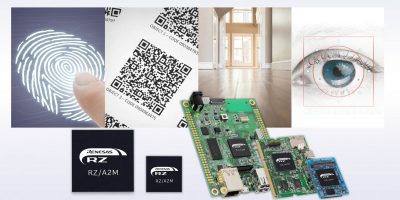 Embedded artificial intelligence (e-AI) incorporates AI into embedded systems by bringing intelligence to endpoints. According to Renesas Electronics, there are approximately 150 companies in more than 10 countries worldwide conducting trials based on e-AI and there are more than 30 e-AI use cases underway. In response, Renesas has developed a RZ/A2M microprocessor (MPU) to expand the use of e-AI solutions to high-end applications. The RZ/A2M MPU delivers 10 times the image processing performance of the earlier RZ/A1, and incorporates Renesas’ dynamically reconfigurable processor (DRP), which achieves real-time image processing at low power consumption, claims Renesas. As a result, applications incorporating embedded devices, such as smart appliances, service robots, and compact industrial machinery, can implement image recognition employing cameras and other AI functions with low power consumption.

Renesas already offers AI that can detect previously invisible faults in real time by minutely analysing oscillation waveforms from motors or machines. To accelerate the adoption of AI in the field, Renesas has developed the RZ/A2M with DRP, which makes possible image-based AI functionality requiring larger volumes of data and more powerful processing performance than achievable with waveform measurement and analysis. Real-time image processing using very little power means that battery-powered devices can perform tasks such as real-time image recognition based on camera input, biometric authentication using fingerprints or iris scans, and high-speed scanning by handheld scanners. According to Renesas, this addresses the issues highlighted by cloud-based approaches, such as the difficulty of achieving real-time performance, assuring privacy, and maintaining security.

The RZ/A2M with DRP has a large capacity on-chip RAM, which eliminates the need for external DRAM. It supports the MIPI camera interface, popular in mobile devices, and is equipped with a DRP for high-speed image processing. Two-channel Ethernet support boosts network functionality, while an on-chip hardware encryption accelerator enhances secure functionality, says Renesas.

Samples of the RZ/A2M with DRP are available now. The RZ/A2M MPUs are offered with a development board, reference software, and DRP image-processing library. Mass production is scheduled to start in the first quarter of 2019.